Each year, the LABC (Local Authority Building Control) Awards are held to recognise the very best design and highest quality standards in the construction industry.

For the past seven years, a number of our projects have been nominated for an Award and this year was no exception. We had projects in two categories. The first was Best Public Service Building for a project to extend the Ashridge Estate Office near Tring for the National Trust; the second was Best Educational Building for a new free-standing nursery on the site of Clophill St Mary’s CofE Lower School.

Last Friday evening, our team attended the Central Region Awards ceremony in Milton Keynes. Competition in both categories was stiff, with entries from some particularly large and high profile projects. Although not successful ourselves, we would like to congratulate all of the winners on the night, and look forward to continuing our very strong and positive partnership with Central Region Building Control teams. 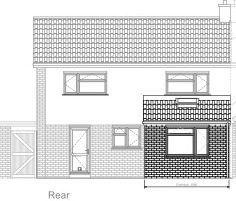 We have this week received confirmation from South Oxfordshire District Council that planners have granted permission for the construction of a larger home extension under their Prior Notification scheme.

Normally, Permitted Development only allows extensions beyond the rear wall of the original dwelling by up to four metres for a detached house, or three metres in any other case.

Temporary relaxation of the Permitted Development rules (from May 2013 to May 2019) applies where the proposed works are limited to a single storey rear extension of a depth between four metres and eight metres for a detached dwelling, or between three metres and six metres for any other type of house (unless you are in a Conservation Area or AONB).

A major advantage of using this service is that it is free of charge, and it also takes a little less time than a Householder planning application (six weeks as opposed to eight). A simple form is completed, and the Local Authority then notifies close neighbours that adjoin the property to give them a chance to comment on the proposal.

If there are no objections, or planners consider that there is no effect upon the amenity of neighbours, then the application will be given permission. Currently, to benefit from these permitted development rights, the extension must be completed on or before 30 May 2019.

For further advice about planning or prior notification applications, do get in touch.