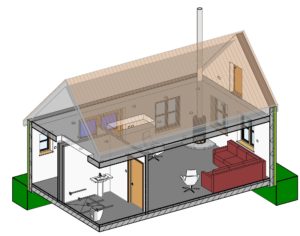 Residents in a village not far from our office have recently secured planning permission from South Oxfordshire District Council for a series of improvements to their home. This is an interesting example of how a series of proposals can be conveniently rolled up into one planning application.

Consented changes include a partial conversion of the integral garage to create a new utility space, a series of alterations to the walls and doors within the ground floor of the house to open up the space, and lastly conversion of an annexe outbuilding into guest accommodation. 3-D visualisations helped the homeowners to realise the potential for each of the interior spaces.

It’s not always appreciated that a series of desired home improvements can be combined together into one application, but there are advantages as this can save on planning fees and administration time. Homeowners usually have up to three years to start on the construction works, but providing some elements have already been completed they can decide to carry out the remainder at a later stage.

In the case of this village project, it is hoped that works can begin on each of the elements later this year.

We are working hard at the moment to help get a popular Grade II Listed Chilterns pub back into operation and trading again. The White Lion in St Leonards, which is much loved by local residents in the surrounding hill top villages, has had a chequered history in the last few years. It’s been closed for business since January 2014. However, the future is now looking much brighter.

The White Lion was bought by Mandy Grimwood as a business opportunity in June 2017. Mandy appointed PCMS Design to advise on the potential for the building; it was clear that in order to be a viable business the whole building required renovation and extension. Our design proposal includes the demolition of a poor quality rear toilet block and reconfiguring and enlarging the public bar and restaurant area, whilst retaining the pub’s historic character. All areas of the pub are affected by the proposed works, including the landlord’s accommodation on the first floor.

A planning application with listed building consent is currently under consideration by Chiltern District Council. Director of PCMS Design Alex Bond said: “Everyone involved in this unique project is very excited by the prospect of the pub being put back on the map, and so far it has the support of many neighbours and several groups, including the ‘Save The White Lion’ campaign. It is rare to get the opportunity to help open a pub, and we hope to see it re-open next year.”

A Buckinghamshire client has recently completed a new for old workshop and storage barn project. There was a rather impractical old large timber shed with corrugated metal roof which formed part of the front boundary to the residential property, and our client approached us to find out if designs could be prepared for a replacement building. The challenge was to find a solution that was acceptable to planners, because the building was not only within the curtilage of a listed building and also in a conservation area.

As our client was looking for a useful workshop and vehicle parking space, we recommended total replacement due to the poor quality of the original timber building and unsuitability for conversion. This also allowed for a slightly taller roof to incorporate a mezzanine storage area accessed via timber stairs, and two sets of double doors. The eaves level next to the neighbouring property was maintained to minimise any impact. Care was taken to replicate design features from the original building, such as the distinctive windows with vertical glazing bars and horizontal timber cladding.

The owner is very happy with the result: “Thank you for finding a practical solution for my new workshop. The assistance you gave with the design and navigating through both the planning and construction process is really appreciated.”